By Mark Schauss on November 30, 2012 in Military Actions, Peter the Great, Russian Empire 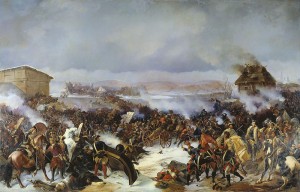 The Swedish Victory at Narva by Gustaf Cederström – 1910

The Battle of Narva, a battle between Charles XII of Sweden and Peter the Great of Russia (Episodes 34 and 35) and was a major disaster for the Russians. While the Russian’s lost tens of thousands of men, Peter learned a valuable lesson. He knew that the Russian military needed to be modernized because it would continue to suffer defeats like this to his European enemies. One of the early battles of the Great Northern War, Narva was fought on November 30, 1700. Charles XII sent his small army to relive the troops stationed in Narva against a vastly larger Russian Army.

Peter the Great wanted to expand his empire to the north. He had put together an alliance with Denmark-Norway and August the Strong of Poland-Lithuania. Charles, with the help of the British Royal Navy and the Dutch Navy landed near Copenhagen to force the Danes and Norway out of the alliance in August of 1700. From there the Swedish army with backing of Estonian and Finnish troops headed to Estonia.

By early November, the Russian army, numbering about 35,000 men, surrounded Narva, which while in Estonia, was a part of the Swedish Kingdom. Charles XII decided to take his army of 10,000 to save his embattled comrades. Charles led the attack with his 8,000 troops (2,500 were inside the city) aided by General Carl Gustav Rehnskiold. Peter, for his part, had left Narva a few days before the Swedes arrived. Many in Europe at the time viewed this as an act of cowardice.

On the day of the battle, the weather was horrific with a blizzard blowing in the faces of the Swedish army. At midday, the winds switched and blew directly into the face of the Russians which caused Charles to take advantage and attack. The actual battle itself was a rout with Charles blowing through the undisciplined Russian army. While retreating the bridge over the Narova river collapsed with over 6,000 Russian soldiers falling into the frozen river and drowning.

Almost all Russian artillery pieces were lost during the battle leaving Russia indefensible. Had Charles decided to carry the war into Russia, there would have been no way for them to fight back. Shockingly, Charles decided against pressing the attack and turned southward to attack August the Strong of Poland-Lithuania to teach him a lesson. This delay was all Peter needed to regroup and learn from the terrible lesson taught to him be the loss at the Battle of Narva.

Four years later, Peter returned with 45,000 men, far better trained and equipped than before and took the town. The Swedish army was destroyed with most of the inhabitants killed. Russian losses were severe with over 10,000 killed or wounded.