Alexander I, was the head of the Russian state when it was invaded by Napoleon. His patient leadership during the invasion and Alexander’s change from leading the army himself to relying on his more experienced generals was key to winning the war. Since I recently blogged on Alexander, instead of rehashing his life, you can read about it here.

Napoleon and the Battle of Austerlitz

Napoleon at the Battle of Austerlitz

The Battle of Austerlitz, fought on December 2, 1805 was a brilliant win for French Emperor Napoleon Bonaparte. The convincing victory, also known as the Battle of the Three Emperors, successfully ended the Third Coalition and caused the dissolution of the Holy Roman Empire. Armies from Austria under Francis I and Russia under Alexander I faced off against the La Grande Armée near the town of Austerlitz now known as Slavkov u Brna in the present day Czech Republic.

The French army numbered 72,000 while the Russo-Austrian fielded 85,000. Napoleon was uncertain of victory but he had a plan to sucker in his enemies and deliver a smashing defeat. He was certain that the Allies would try to attack his southern flank which would play right into his plans. Napoleon was assured that he had some of the finest Generals as well the best trained army on the continent.

The Russians were led by aristocrats who often times bought their positions instead of being given their commissions due to merit. Soldiers were poorly trained and often times abused. Loyalty though of the men was unquestioned and they fought hard. The Austria army was in disarray as a major reorganization was ongoing without the appropriate training for the officer corp. It was a setting ready for disaster.

Emperor Francis I and overall commander General Mikhail Kutusov both felt that caution would be the best battle plan but Alexander I and his nobles pressured for an attack. This was falling right into Napoleon’s hands which he took advantage of.

The battle itself was marked by poor coordination and slow movements by the Allies which not only allowed Napoleon to attack the center of the Allies,  but to repulse the thrust at his southern flank. The fight was brutal and often hand to hand but gradually, Napoleon’s men wore their opponents down. By the end of the day, the Allied troops were in full retreat and in panic.

Losses for the allies was catastrophic. They lost fully 37% of their army compared to 13% of the French army. On December 4th, the Austrians signed a truce with Napoleon, followed by the Treaty of Pressburg which effectively took Austria out of the war.

While Tsar Alexander I blamed the outcome on Kutuzov, he also must have realized that Kutuzov had recommended a pull back instead of an attack. If anyone was to blame for the defeat, it should have been Alexander yet his ego wouldn’t allow it. Years later, in 1812, he listened to Kutuzov who successfully defeated Napoleon by harassing the French Army when they invaded Russia instead of directly confronting him.

Poland and the November Uprising 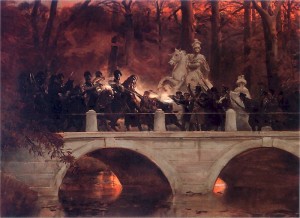 Battle on a bridge in Warsaw’s Łazienki Park

On this day in 1830, Polish cadets, tired of being under the thumb of Russia after being partitioned post-Napoleonic wars, decided to revolt to free Poland from tyranny. While initially successful locally, they were eventually crushed by the better equipped and numerically superior Russia army.

Poland had been partitioned between Prussia, Russia and the Hapsburg Empire in 1795 and completely enveloped by Austria, Russia and Prussia in 1815 due to its aid to Napoleon. Poland was supposedly a autonomous country with a constitution but was allied to Russia through the Tsar as King of Poland. Increasingly, over the years, the Tsar’s, Alexander I (Episode 53) then Nicholas I (Episode 56) disregarded the constitution entirely. Instead they made Poland their fiefdom and did as they pleased. This stewed a growing animosity among the entire population and in particular, the nobility and military.

In 1815, Alexander I appointed Grand Duke Constantine Pavlovich, his brother, as viceroy of Poland. Constantine was considered a tyrant by the Polish people who despised him. On November 29th, things began to boil over. A group of young cadets, led by Piotr Wysocki attacked the Belwedere Palace where the Grand Duke lived, trying to capture him. They were unsuccessful as Constantine escaped wearing women’s clothing.

Prince Adam Jerzy Czartoryski tried to negotiate a peaceful resolution with the Grand Duke who initially agreed to be lenient with the cadets but radical members of the Polish military and government rejected the offer. All but two of the General’s of the Polish army went over to the rebels. A provisional government was formed with General Jozef Chłopicki being named Dictator of the Uprising.

Chlopicki did not favor a war with Russia as he felt there was no way it would be successful but he bowed to the pressure of the people. He tried to quell the uprising by appealing to Tsar Nicholas I by sending Count Drucki-Lubecki to St. Petersburg. The mission was futile. The Tsar demanded full capitulation or face military intervention.

The Sejm, the governing body of the Polish government declared that the union between Poland and Russia was null and void on January 25, 1831. They proclaimed that “the Polish nation is an independent people and has a right to offer the Polish crown to him whom it may consider worthy, from whom it might with certainty expect faith to his oath and wholehearted respect to the sworn guarantees of civic freedom.” It was, for all intents and purposes a declaration of war.

Without going into details, the war did not go well for Poland. By October 5th, 1831, the last of the rebellious troops crossed the border to Prussia and laid down their arms. Over 40,000 Poles were either killed or wounded. The Russians suffered around 23,000 killed or wounded with an additional 5-12,000 dying of disease. While many historians believe that Poland could have won the war had they been more unified but the fact remains that the resources of Russia were far too great for a successful Polish outcome.