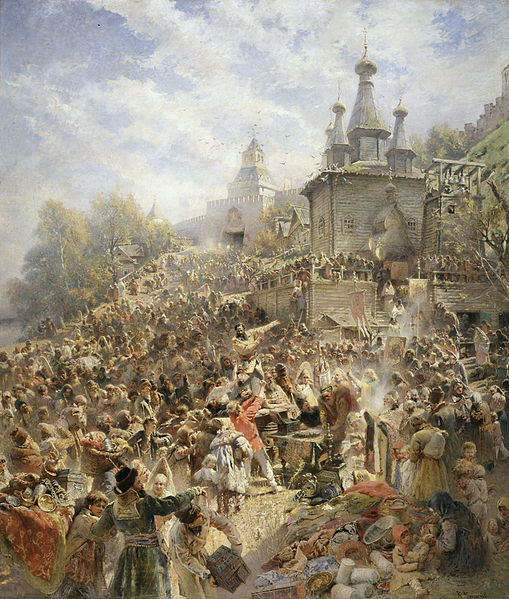 The Appeal of Minin during the Time of Troubles

The Time of Troubles, it could be argued, could be listed as the greatest threat to Russia’s existence but as for important events, I have it ranked only number twelve for a number of reasons. Granted, it was a troublesome time to be a Russian with the great famine killing one-third the populace of the country. It also saw the Bolotnikov Rebellion, which showed the great rift between the haves and the have-nots. And of course, its end gave us the first in a long line of Romanov Tsars.

When looking back at the Time of Troubles, you see a number of events within its time frame of that influenced the future of Russia. One of the most important ones is the edict by Tsar Vasily Shuisky to lengthen the time that serfs could be hunted down and returned to their masters from 5 years to 15. That would expand during later rulers but it set the precedent and locked the serfs down in no uncertain terms.

It also marked one of the high points in Russian unity and pride, especially after the expulsion of the Poles from Moscow in 1612 under the leadership of Kuzma Minin, a Nizhny Novgorod merchant, and Prince Pozharsky. The groundswell of support was crucial in the survival of the country and had it not happened, we likely would not know the country of Russia as we know it.

While it is a critical time in Russian history, it ranks far below some of the others that I will be addressing in the coming weeks.