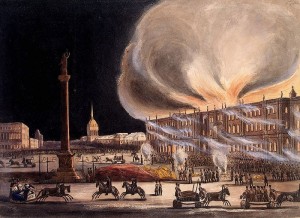 The fire at the Winter Palace in 1837

On December 17, 1837, the Winter Palace caught on fire. The official home of the Tsar’s of Russia, it was first built starting in 1711 commissioned by Tsar Peter the Great. The first Winter Palace was designed by Domenico Trezzini, a Swiss-Italian architect. Trezzini’s most famous work that still stands today is the Peter and Paul Cathedral.

Peter I, as he was want to be, soon grew tired of the building and commissioned a second one to be built. This time he switched architects to Georg Mattarnovy. It was in this version of the Winter Palace that Peter was to die in 1725.

It was under Elizabeth I that the palace really took shape. At a cost of over 2.5 million rubles, it was truly spectacular. But under Catherine the Great, things really became extravagant. Incredible art pieces were installed throughout. The Hermitage was built adjacent to the Winter Palace by Catherine in 1764 to hold the overflow of art.

More art poured into the Winter Palace after taking many masterpieces from Napoleon’s ex-wife Josephine. Alexander I and Nicholas I continued to upgrade things with the latter being responsible for the rebuilding after the fire in 1837. It now contains 1,500 rooms, 1,786 doors and 1,945 windows which is staggering to say the least.

Because of its size, after the assassination of Alexander II, it was deemed to be too big to protect the last two Tsar’s. The the Palace of Gatchina was now the primary home, some 40 miles from St. Petersburg. Nicholas II decided that this didn’t suit him and his family and moved them to  Tsarskoe Selo.

Under Soviet and current rule, the Winter Palace is part of the overall Hermitage museum. It attracts over 3.5 million visitors each year. It is a marker for the decadence of the Russian Tsar’s and a monument to incredible art. Hopefully, in the not to distant future I will be able to visit the Winter Palace which I understand was not very far from where my ancestors lived.