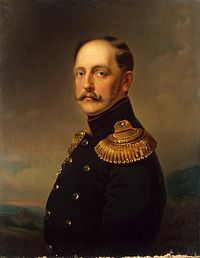 Tsar Nicholas I of Russia

Nicholas Pavlovich Romanov (Episodes 56 and 57) was born on July 6, 1796 to Empress Maria Feodorovna and Tsar Paul I in Gatchina. His reign, which lasted for thirty years from 1825 to 1855 was marked numerous crises and a nation changing revolt. While the revolt, by the Decembrists, was ultimately a failure, it lit the torch of dissent that would eventual lead to the overthrow of Nicholas II in 1917.

The younger brother of Alexander I, the Tsar Liberator, Nicholas became the most autocratic and oppressive of the Tsar’s. His ascension to the throne and his death in 1855 were framed by two events, the Decembrist Revolt and the Crimean War. Both were disasters with the former showing the dissatisfaction with the monarchy and the latter causing unbelievable misery to the Russian troops.

As the third son of Paul I, he was not considered Tsar material. His older brothers, Alexander and Constantine were the two who were groomed to lead. Nicholas was given a strict Prussian style military education per the instructions of his father. This led Nicholas to view everything during his rule as a military exercise.

In 1819, his father, Alexander I made a surprise visit on Nicholas at his Anichkov Palace home. He was there to announce that he, rather than Constantine would be the next Tsar as his older brother renounced his succession. The problem was, this decision was to be kept private which would cause problems when Alexander passed away in 1825.

When his father died in November of 1825, Nicholas initially pledged allegiance to Constantine but after his brother again denounced his claim, Nicholas announced that he would take the throne. This did not please many in the military and with the gentry as they knew that the new Tsar would be a overly conservative one. This led to a number of officers to rebel. The Decembrist Uprising was quickly and brutally crushed with five conspirators executed. The rest were exiled to Siberia.

From here, Nicholas’s rule was marked by his mistrust of the gentry and his belief that only through autocracy and the Romanov’s in particular, could Russia be ruled effectively. He turned Russia into a police state, setting up a spy network that would continue on until 1917 and then get transformed into the secret police of the Soviet Union.

The condition of the millions of serfs were discussed and a recommendation of freedom for them was made, but Nicholas could not agree to this. He believed that while serfdom was evil, freeing them would be even worse. This fact alone would have put him on this list but what he did next cemented his legacy as one of the worst rulers.

When he took over in 1825, Nicholas continued trying to expand the Russian Empire, especially southward towards the Ottoman Empire. In 1853, the Tsar provoked a war with the Ottoman’s over the control of the Holy Land. What Nicholas did not comprehend was French and British concerns over Russian aggression. They joined with the Ottoman’s, much to the surprise of the Tsar. The coming Crimean War, was a total disaster for the Russians. Thousands of brave soldiers died for naught. Nicholas would not see the end of the war as he died on February 18th, 1855. The Russian Empire was at its largest but, because of the outcome of the war, it would be greatly reduced.

His legacy is one of an autocratic, unbending and uncaring militarist who was more concerned with his status that the well being of his people. This is what puts him on this list.