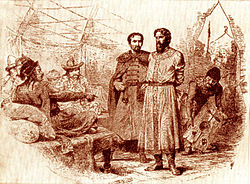 Prince Mikhail of Tver, the second son of Grand Prince Yaroslav III of Kiev was born on November 22, 1318. Mikhail Yaroslavich was the Prince of both Tver and had two rules over the principality of Vladimir (1304-14 and 1315-18). He was made a saint of the Russian Orthodox Church.

Prince Mikhail had alienated the Russian Orthodox Church during his reign. Metropolitan Petr came to power despite Mikhail’s nomination of another person. The hostility between the church and Mikhail carried on for the rest of his life which makes his elevation to sainthood quite curious.

The time of his rule was the period in which Russia was ruled by the Golden Horde of the Mongols who were based in Sarai.  It was also a time where Tver battled Moscow as a dominant city in the eyes of the Khan. Prince Yuri of Moscow (Episode 5)  was his main rival. At the time the rivalry was fought out not just on the battle field but at the court of the khan of the Golden Horde. At first, Mikhail had a good relationship with Tokhta khan and his successor Uzbeg but Yuri was able to circumvent this by marrying Uzbeg’s sister.

Uzbeg then decided that he would take back Tver and Vladimir from Mikhail by sending troops to aide Yuri in his fight. Mikhail was able to defeat the combined forces and captured Yuri’s wife and Uzbeg’s sister. Unfortunately for Mikhail, his hostage died while in his custody. This obviously infuriated the khan. He sent recalled his general Kavgadii to Sarai who accused Mikhail of murdering the khan’s sister and warring against the Horde. This was to be Mikhail death sentence.

Mikhail had no choice but to go to Sarai to face the charges but his plea that he was not guilty and that his hostages death was accidental was of little help. He was summarily executed.