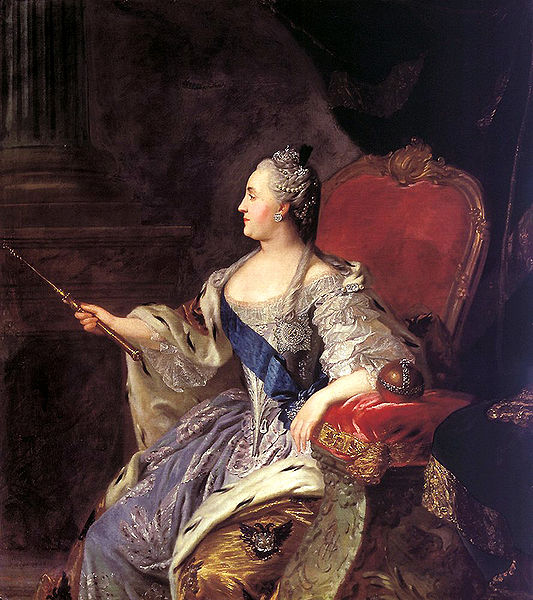 Catherine II, also known as Catherine the Great makes it to #4 on my list as best Russian ruler. Born in 1729 in Stettin, Prussia as Sophia Augusta Fredricka, she was betrothed to the orphaned grandson of Peter the Great whom she married in 1745. This loveless marriage was to produce one son, likely not her husband’s, a boy who would become Paul I. The one most associated with fathering Paul was Sergei Saltykov.

Her early years in the court of Empress Elizabeth were difficult. The empress was a controlling women who had little tolerance for independent thinkers such as Catherine. She wrote a autobiography of the times in the court of Elizabeth which showed how isolated she felt.

When Elizabeth died, Catherine’s husband, now known as Peter III, assumed the throne. He proved to be extremely unpopular in the court as he ended the war with Prussia and immediately declared was on Denmark. To make things worse, he alienated the house guard units and the influential Russian Orthodox Church. There was one issue that made Catherine nervous and that was the very real threat of her being divorced and sent to a convent as he had taken and flaunted his mistress Yekaterina Dashkova.

On July 9, 1762, Peter III was deposed and strangled to death. Some believe Catherine was in on the murder but that is highly unlikely. The new empress was crowned on October 3rd of the same year and quickly consolidated her power. She quickly began to focus the early years of her reign on the promotion of administrative efficiency and expansion of educational opportunities. Catherine was also a patron of the arts as seen by her founding of the Hermitage Museum in St. Petersburg.

Her international flair culminated in the victorious Russo-Turkish which was somewhat tarnished by a domestic rebellion. Emelian Pugachev led thousands of disgruntled Cossacks and serfs in 1773-75. The city of Kazan was burned by the rebels but their army was eventually brutally quashed by the Russian army.

She did much to raise the world’s image of Russia and greatly improved the administration of local laws and taxes within the country. While she has numerous flaws, overall Catherine made Russia a better place than she left it. Unfortunately, her son Paul I, would unravel much of her work and put the Romanov dynasty on a death spiral that would culminate with the abdication of Nicholas II in 1917.