By Mark Schauss on November 18, 2012 in Military Actions, Peter the Great, Russian Empire 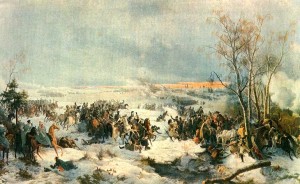 The Battle of Krasnoi, while not well known, was a smashing victory for the Russian Army against the retreating Grand Armee of  Napoleon Bonaparte. Having been smashed in the Battle of Moscow, Napoleon believed he could first head to his supplies in Smolensk, then try to head to Minsk where another storage site was available. Unfortunately for Napoleon, the Russian winter came early and hard. His men were being battered by the sub-zero temperatures, snow and constant attacks by Cossack horsemen.

Napoleon had arrived at Krasnoi on November 9th and decided to wait there for the armies of Marshall’s Davout and Ney. He also believed that there was no way for the Russian’s to be close as they must have also suffered greatly due to the cold and snow. How wrong he would prove to be. General Kutuzov and General Miloradovich were travelling on a parallel road to the south of the French. Scouts for the Russians believed that there were only a small number of French troops in Krasnoi so they decided to swing northward and smash them.

By the time all the French troops reached Krasnoi on November 15th, so did the Russian army. Instead of just attacking with a full assault, Kutuzov decided, after realizing that the whole of Napoleon’s army was there, that they should launch smaller attacks to harass the disorganized French. Having vastly larger number of soldiers and artillery, Kutuzov’s decision has baffled historians for years.

Day after day, the Russian’s and French fought valiantly but Napoleon’s men were by now starving, frustrated and tired. They had to get to one of their supply depots in the town of Orsha, some 25 miles away. Napoleon feigned a major attack which scared Kutuzov and Miloradovich into backing off. Instead, they decided to lob artillery fire into the French lines.

Finally, by November 18th, Marshall Ney, with 11,000 troop decided to attack Miloradovich and his 12,000 strong me. At first, Ney’s men broke through two lines of the Russian infantry before being repulsed by the third line. The French refused to surrender, with the remaining 2,000 soldiers heading into the forest. When Ney reunited with Napoleon at Orsha, he made it there with only 800 men.

What has puzzled historians and angered Tsar Alexander I was that Kutuzov refused to press his advantage and destroy Napoleon who was terribly weakened. While the Russians could claim a major victory, having captured 20,000 French soldiers, and killing between 6-13,000, it was a hollow victory as they should have crushed the French completely.

Kutuzov was smart not to have pressed his advantage as his men were exhausted and he was a general who was deeply concerned with the health and morale of his men. Because of that he was greatly loved by the Russian people which caused Alexander I to make him the Prince of Smolensk. 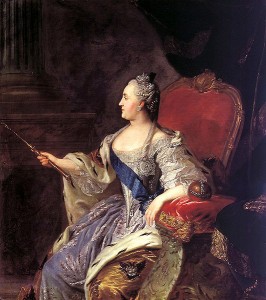 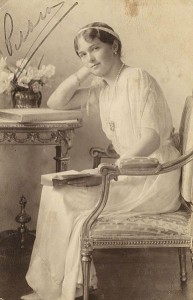